We are very pleased to announce that the Fig Tree Foundation has awarded The Strongest Oak Foundation a grant of $10,000 to fund our internship programme in Rwanda.

Recognizing that there is a visible gap between education and meaningful employment in Africa, TSO developed an internship programme in which we recruit local employers to provide part-time, relevant work to our Strongest Oaks while the Oaks…

Our wish for all of our Strongest Oaks is for them to become independent, both financially self-sufficient and emotionally prepared to tackle the challenges of adulthood. Our Rwandan OakJean de Dieu (JD) Tuyisenge has not only met our expectations but has exceeded them.

We are so pleased to announce that JD is our first “graduate”! We have invited him to leave…

Neema has begun a one-year internship at a gift shop, the Likembe shop in Bukavu. In this job, she is learning entrepreneurial skills key to helping her eventually launch her career in selling woodworks (her primary goal). She's learning sales and customer service skills and works three days per week. This is her first job ever!

Espoir has completed his university orientation and begun classes in Information Technology at the Uganda Christian University.

When our Oaks are first "adopted" by The Strongest Oak Foundation, they state a long-term objective. Espoir's objective was to "Graduate from high school and attend an English…

I am a teacher 2.0 for 21st Century Education

Espoir has been accepted into the Bachelor of Science in Information Technology program at the Uganda Christian University. He excelled in his English classes, exceeding all expectations and paving the way for this significant milestone in his life. Congratulations Espoir!

Cast vote for my school to win world education award

It’s a pleasure to inform you that Jawahar Navodaya Vidyalaya Vijiyanagaram’s project entry for Best Use of Social Media in Education has been nominated for World Education Summit Awards 2012.The World Education Awards have been instituted with the aim of felicitating and acknowledging unique and innovative initiatives in the field of education… Continue

Further to our last update about Espoir moving to Uganda, Pastor Samuel and theKulika team assisted Espoir in getting settled in his new country and at…

Charles Mugabe in the News!

Check out this Huffington Post article written by Simon Adams (Executive Director of the Global Centre for the Responsibility to Protect in New York) in which he recalls his meeting with Charles and their discussion about the Rwandan genocide.

I have an iPad2 and a New iPad ... and a very happy nephew who has inherited my iPad1.

We are an English class of 30 students from the most
beautiful and peaceful country in Africa, Ghana. We
are an enthusiastic class interested in doing an
intercultural collaboration with students from your
school. We have heard much of your country and we are
really interested in having friends from your school
who can really tell…

Since 2004 I’ve created a website of some kind for each class, with a discussion board – a place where students can ask questions or make comments on our class any time of day or night and get a response. I think it’s an essential component of any modern class.

This semester something new happened, though. My students created a Facebook group for my class (and then invited me to join it!). Slowly I’ve watched and noticed more and more,…
Continue

The Other side of the class room

When people talk about flipping their class room, the conversation seems to focus on moving certain used-to-be-classroom activities (namely chalk & talk) from class-time to home-time using videos, screencasts and podcasts.   That is one side of the flipped classroom model.

The flip-side of the model though, is what to do with the extra time created in the classroom.

Mainstream, traditional flipped-classroom advocates would have students doing their ‘homework’ in class time,…

Letter from the Field – Steven Shyaka

The following is a letter sent to Stace by Steven Shyaka (Rwandan Strongest Oak since 2010), in anticipation of Stace’s visit to Rwanda in November 2011. English translations of Kinyarwanda words are given in [square brackets]. Some deletions were made for the sake of brevity and some edits made for the sake of clarity – the sentiments remain unchanged.

Amakuru [how are you] Stace?

Congolese Strongest Oak Zingire Namegabe has begun the exciting next step toward her ultimate goal of launching her own business: an internship in advertising and sales at a bottled water manufacturer and distributor called Mugote (in Bukavu). 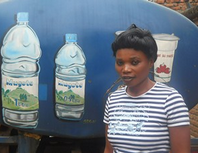 New trip on We Collaborate

Day 1 at We Collaborate.

Yesterday Kieran, my son, was 18 months old and I received a late-but-expected Christmas gift: a calendar with his pics! Today I enjoyed and share it with my mom and we both were amazed how wonderful he is and how much he looks alike his mom and dad :)

I've also posted a comment a found out in another calendar, about how antique Mexican cultures discovered mezcal-tequila and was created it by gods, very interesting way of thinking about…

TSO Oaks Give Back to their Community (December 2011)

Despite the political uncertainty surrounding the recent 2011 Congolese elections, TSO volunteers made the holiday season a bit brighter for impoverished youth in Bukavu, Eastern Congo. Oak Leader, Pastor Samuel Muderhwa and his wife, Faida, hosted a Christmas dinner in Bukavu, DR Congo for over 360 underprivileged youth – including several orphans. The event included a series of inspirational plays, poems and songs – mostly around social themes relevant to Bukavu including rape, tribal…

In addition to a formal education, work experience is an essential part of building a career. To this end, Steven Shyaka and his sister Jeanne Mutoni have obtained internships in their respective fields. Steven is working as a legal assistant in the Kigali-based law…